Ok, so it's been a while since I've knocked back a few IPA's and sat down to the ol' blogger machine.  So, it seems about that time.  A while back I was ranting about stuff like Strava Challenges and how SS MTB's make you work corners of your fitness that a geared bike may not (unless you are really disciplined about training)(more about this below).  It's time to continue a bit on that same thread...
I've been a big fan over the last few years of less junk time in the saddle and more intensity.  It's proven to at least qualitatively move my fitness in the right direction.  I've always worn a heart rate monitor and used it to do some simple post ride analysis to understand how long I spent in given zones.  I'd always wanted some sort of power meter but being the cheap a$$ that I am, I could just never part with the dough.
Finally, PM's have come down in price and I picked up a Stages PM (crank arm based) unit.  I'm not here to argue the pro's and con's of the Stages...sure it's a one sided measurement that uses math (multiplies by 2) to get overall power.
So, here's the deal...I'm no expert at using this thing (YET) and especially using it on a SS MTB which there seems to be very little published out there....  So, if you have some great insight, well then, lay it on me!
I should also say that I don't have a "real" head unit to record the power data from the Stages PM...that'll be here tomorrow but for the last month, I've been using the Strava iPhone app which has at least allowed me to do post ride analysis....speaking of that, there is a great free application called Golden Cheetah written by a guy in the UK that is amazing for analyzing the data.
Here's what I've learned...
1.  I believe my FTP (Functional Threshold Power) to be around 265 watts...now, big disclaimer...if my left leg is 5% stronger than my right, then when you do the complex math of x2, then my overall is going to be 10% high...so, if you're like, "There's no f*cking way Angry Ray is making that kind of power"....well, you might be right.  Honestly, I don't think it's WAY off....and BTW, it's from MTB rides and some modeling that GC does...not trainer stuff and not roadie stuff...(dirt, rocks, slippery surfaces...you know...reality).
2.  Given that, my Watts/Kg is around 3.6...yes, I'm a fat Mofo...162# of fat.
3.  I've realized why SS MTBing is putting coaches out of business...  Ok, so pay attention...some smart dudes came up with a way to display data called a Quadrant Plot or Quadrant analysis.  It's basically a plot of pedal force against pedal velocity...(WTF?)....yes, so imagine this...you hit a short punchy climb on the SS, and you stand up and mash the pedals, barely turning them...LOW CADENCE, HIGH FORCE.... at the other end of the spectrum is HIGH CADENCE, LOW FORCE...that is spinning.  So now time for a plot...below is a plot (not mine) of a roadie time trial.  Note how the spread of data points looks like a shotgun blast at close range.

Now look at the Quadrant plot of my SS MTB ride where I did a bunch of climbing in Flagstaff... 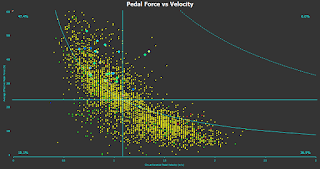 My points are all over the place!  Why is that?  I've only got one f*cking gear people...when it's steep, I stand and mash...when it's not, I spin like crazy. (BTW, I've checked the data from the PM on a smooth hill and it's nice and "clean").   Now, why is that good?  Imagine for a second you have an constantly variable automatic transmission on your bike..it changes gear ratio so you always pedal at 90 rpm.  What do you think happens?  You are super strong at 90 rpm but otherwise, you are NOT!
Thus, a SS bike essentially MAKES you generate power in all quadrants of the plot since largely your power output is a function of grade (how steep) and gearing.  (Essentially the idea that you have to work both your slow-twitch (endurance) muscle fibers and your fast-twitch (sprints) and that's probably more than I'm qualified to discuss!)

Now here's what's interesting...overall on that ride, I spent almost 1/2 the time (47.4%) in the upper left quadrant (high force, low cadence)...but when I select one of the 16ish minute climbs (Weatherford), it's almost all in that quadrant(Green dots) 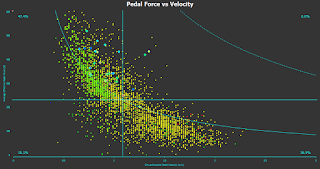 The other very interesting thing is where the dots are relative to the curved line.  That curved line is a constant 250 watts...dots over it are > 250W, dots under are < 250W.  So in that upper left quadrant, those green dots seem to generally be on or a little above the line whereas in the lower right quadrant (low force, high cadence), they tend to average lower.  The vertical line separating those quadrants is 59 rpm which happens to be about where I would transition from sitting to standing.  Most of the rides I've done so far with the PM tend to look like this which tells me either, 1) my seated pedaling power is low and/or 2) I tend to choose routes and gearing that force me into that upper left quadrant.
What I do at least anecdotally see, is that on some gradual, steady grades, there is a combination of grade and gear that seem very "in-between" for me... too hard to sit and mash, too easy to stand...  I think this tends to be in some of that lower right quadrant.

In any case, I'm gonna do some more experiments...probably find a long steady road of the grade where I can sit and not be spun out so I can verify if my ability to apply around 250 watts in the 60-90 rpm range is weak or if it's simply been a result of what I've been riding.  If truly that area is a weakness for me, then I can actually choose routes and gearing that force me to do work in that area... that's cool!  ah....inner-engineer is satisfied....

There's just so much more to learn with this thing...with a proper head unit, I'll be able to capture HR and learn some cool stuff about the relationship between HR and Power.