Trashing a Tire in the Interest of Science

Having been mountain biking for the last 7 years or so in the sharp, thorny environment of AZ, I’ve certainly experienced my share of punctures, slices, and other issues.  Most of us are aware of the concept of plugging a tire using the commercially available product called “tire bacon”.  It’s basically a scaled down version of what people have been using to plug holes in car tires for quite some time.

I have actually never used tire bacon..matter of fact, I have lost the 2 Genuine Innovation tire bacon kits that I’ve bought due to somehow bouncing out of my jersey pocket.  I have however, stuffed other things into a sidewall hole to take up space and allow the sealant to fill the remaining yet smaller spaces.  Those things being a small piece of cloth (like t-shirt material) and even a stick.
However, I decided to try some other materials that are cheap and easily obtained.  Those being, strips of an old inner tube, cotton string, and strips of an old mouse pad.

It just so turns out that I’ve been putting off changing out an old Maxxis Ikon so before doing so, I decided it’s final gasp would be donating it’s tread and sidewalls to science…  I decided that I would see how the above materials filled a cut between about 0.15” and 0.2” since anything larger, you’d probably be either tubing or pulling out the sewing kit.  Punctures up to about 0.2 are great candidates for plugs.

So I took a small pair of sharp scissors and jabbed it in the tread as you see below.  I did this again a few inches away as well.  I then pushed in a strip of mouse pad material(neoprene covered with cloth) in one hole, and a strip of inner tube in the other hole.  I used a small flat bladed screwdriver to do this but in the case of the inner tube, I used a small allen key since the screwdriver just punctured the tube material. 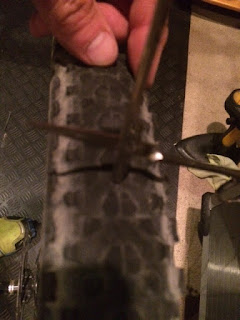 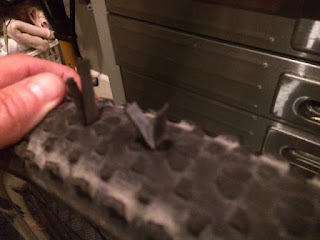 I aired up the tire to 30 psi and after just a little sealant weapage, both sealed up well.
I repeated the process but this time in the sidewall where I punctured 3 slices, oriented radially and stuffed in a slice of inner tube in one, a slice of mouse pad in another, and a piece of cotton string in another. 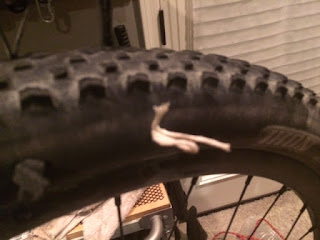 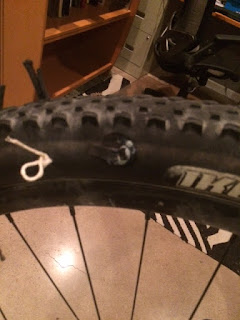 Aired the tire back up and all 3 held air.  I sprayed them all with some windex and none showed any signs of leakage.

I then pulled the tire and what I noticed is that it seems like the sealant gathered around the mouse pad strip and the cotton string but not so much on the strip of inner tube (because it’s butyl rubber perhaps and not too much likes to stick to it). 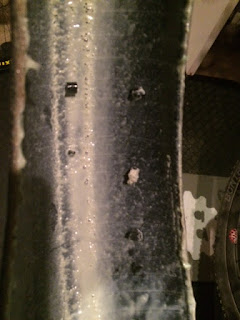 Obviously, I did not go out and ride the tire to see which would stay in the best but would venture a guess that the cotton string and mouse pad strip would have the best chance.  So, bottom line, if you don’t have tire bacon around, any absorbent material would work, but I found the cotton string and mouse pad material held up to the poking device used (flat bladed screwdriver) the best.