Finally, I’ve done something blog-worthy! Whew, I was on a major dry spell regarding what I’d consider truly epic MTB rides….Until now… Monday 10/13 wrapped up the 2014 Coconino 250 Bikepacking Stage race which has to be one of the best(IMHO) multi-day events that combines racing, bikepacking and socializing all in one festering ball of sweat, dirt, faceplants, and phenomenal views. Kudo’s to the corporate staff at the AES headquarters for cooking up this gem.

It was my second coco, after my “win” (lol) in 2012 and a ITT fail in 2013. What I can say is that the stage racing format is awesome and I’d HIGHLY recommend it to anyone thinking about getting into the sport and considering bigger events like the AZT trail race. Ok, let’s get on with it…

Day 1: Mud and Beer
The easiest day of the 4, I decided for a little bit of a later start than the masses and rolled into Flag around 8:45AM. Loaded up and headed out, I passed Carlos shortly down the AZT fixing a flat. It was to be the beginning of his tire troubles that I believe led to his DNF. I passed Fisher Point and then made the left turn that would lead to a fun, rubly HAB section where I would catch the famous endurance freak, John Schilling. We would end up leap frogging a bit and finally entered the “mesa”…The “mesa” by the way is basically a raised portion of land that has been spread with dark brown peanut butter…but, 1) you can’t eat it and 2) it sticks to your tires better than a couple of low self-esteem centerfolds to Hugh Hefner…yeah, bad. We walked for about a mile, cleaning our tires every 20 yards or so.

Finally, we arrived at Marshall Lake where we opted for the detour down to Lake Mary Road. I ended up riding with Artec, a Flag local with extensive bike touring experience that was just beginning to bikepack. We eventually rolled into the ADOT yard where we found Mike K. and Ben getting water. Rolled out after tanking up, we headed to the Schnebly overlook where we enjoyed a great sunset, a few beers (brought by John S and Jeff Z), and a great group of bikepackers.


Day 2: Goatheads, Sand and Extreme HAB
Woke up Saturday morning with everything soaking wet from a heavy dew that evening. I proceed to pack up the wet mess then proceeded down Munds Wagon Trail in the dim morning light. Bouncing my way down, I passed Mike K and Caroline, then rolled into the Circle K where I found Jeff & Nancy. I pounded down a fine breakfast consisting of a sausage biscuit and Red Bull then proceeded to make my way up to Morgan Rd. and around Chicken Point. I then caught Jeff, Nancy, and Jason, before going under the highway and eventually to Red Rocks State Park. There I watered up at the visitors center and proceeded to head up the cluster-f*ck of a trail called Lime Kiln. This thing truly has every bit of evil all mixed into one continuous ribbon of sharp rocks, cacti, sand, goatheads, tall grass, fire ants, and dirt. Oh, and I did I mention sand? Ugh, never have I been so glad to see the final ledgy descent into Cottonwood as I was Saturday. I stopped at the BBQ place and this time said to the woman taking orders, “What is the fastest sandwhich you can make?”. Apparently my sense of urgency made quite the impression since later than night, everyone mentioned how she was offering “quick” options. I’m 99.98% positive she thinks I’m a real d-bag. Brian was also there battling what I’m sure was his worst tire issues of his life. He rolled on, and I unpacked my sleep kit to dry the wet mess a bit in the hot sun.
I packed up, hit the Maverick for some snacks, water and ice, then proceeded to climb the Mingus Monster. …and climb I did…riding, then lots of walking. Finally I hit the singletrack portion where even walking becomes hard with very steep, rocky sections beating you to a pulp. It's a full-body workout pushing a loaded bike up that thing.  This being my 3rd time up Mingus, I knew where the top was and not to get fooled by the false summits…but none-the-less, it was brutal…nothing short of a good swift kick to the nuts. Alas, I got to the top, stumbled along the boulder strewn trail till hitting the road where I found Brad. I headed to the campsite, built a fire, and spent a nice evening socializing with everyone as they rolled in.

Day 3: Epic Descents, Ascents, and Gnar
Woke up early on Sunday knowing that this day as well is a long one. Got packed up and headed down the west side of Mingus. The two sides of Mingus are like Jerry and George, Laverne and Shirley….exact opposites! The west side descent will make you grin like the Cheshire Cat. At the bottom of the descent as the track crosses Hwy 89, I caught up to Ben, Jeff and Nancy where we proceeded through the magic gate and north along the powerline access road. I worked my way around the north side of the Woodchute Wilderness then plummeted down towards the Verde. There I filtered some water, while Jeff, Nancy, Brad, and Chris(?) rolled in. We all chatted a bit, watched Jeff swing out over the Verde on a rope, then I got back to business and began the last huge climb of the route. That climb goes from 3800ft up to 9000ft at the top of Bill Williams Mtn…yeah, it’s kinda rough. I finally made it back to the pines where I tried to regroup and stave off Brad. Finally, he caught me as we rolled through a meadow and made our way towards BW Mtn. All the way there, I kept thinking about skipping it…but like most of us nut jobs probably do, we argue with ourselves; we create mental games. I my case, I just kept saying, “make the turn to the trailhead…just make the turn”. So I did, and shortly up the trail I found Brad taping up some blisters and resting his aching back. We’d end up riding/HABing(mostly HABing) all the way to the top with a nearly constant conversation to help pass the time. Finally, at the top, we cheated death and mostly rode (plus a little downhill HAB) our way into Williams, neither of us wanting to do something silly to prematurely end the race. We grabbed some Mexican food and beers with Artec and Brian, hit the Safeway for supplies, then crashed for a good nights sleep.

Day 4: Bitter Cold, Wind, and Yellow Carpets of Aspen Leaves
We got an early start, heading out at about 5:45, stopped at the Safeway for a hot coffee, and proceeded west. At the RR bridge, we started our clocks(stage start) and made our way down the chilly collection of roads that would get us to the Sycamore Rim Trail. This gem, often called the “suck-a-more” rim trail, or the “sick of more” rim trail, is an eclectic mix of sharp lava rock, stream bed rip-rap, post-holed singletrack, and a little primo singletrack along the rims edge. Any other day, this could be a fun trail, challenging your skills, but with the end in sight, it was generally just survival mode today. Luckily, it came to an end and we made our way back north, across I-40, and over to the Wing Mtn area were we’d ride a cluster-f*ck of moto trails until getting spit out at Hwy 180. There we ate a snack, jettisoned water we didn’t need, and began the climb up FR151 and eventually to Aspen Corner. We encountered Mike K. who was riding the course backwards to find his friend Ben and and ride back to the White Mountains. Chatted a minute, then proceeded to rip down the yellow carpet of aspen leaves towards the Y. There, we both decided to pass on the gap jump(lol) just prior to crossing Mt Elden Rd. Finally, we rolled out onto the finish at Quintana Drive. There we took a few pics and decided to grab a celebratory beer in town.


In Summary, I leave you with a few Angry thoughts.
1. Andersen Mesa sucks, but attempting to ride it after a hard rain is about as successful as wrestling with grizzly…you ain’t gonna win.
2. The view over Sedona with a cloud strewn sky and a setting sun is nothing short of stunning. Sharing it with a group of friends and like-minded individuals is a real bonus.
3. Mingus.Sucks.Bad
4. Getting a loaded bike from 3800ft to 9000ft takes a lot of calories and makes you angry. Very angry.
5. Bill Williams Mtn can cost you your front teeth. Unless you’re lucky. In the case of Jeff Z, his faceplant could ONLY improve his looks.
6. The last day of the Coco isn’t easy, but it is fun.
7. Do this route. If it doesn’t kill you, you’ll savor it forever.

Finally, a pic from JS, what I call, "The Green Socks over the Red Rocks" 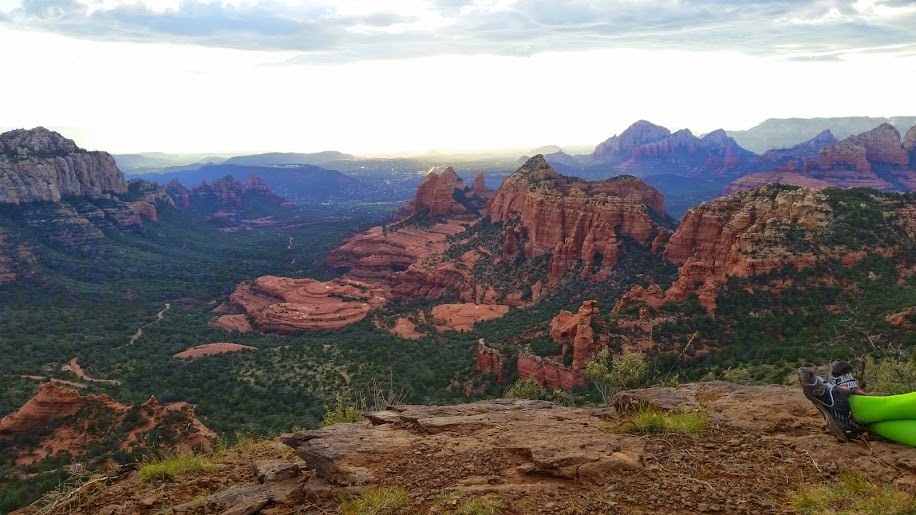