Monday¸despite the daunting clouds and threat of rain, 4 of us headed out to ride some of the new AZT south of Picket Post.  However, we decided to approach it from the Kelvin side since the plan was to do an out and back north of the gila exploring some of the new trail, then do a loop around Ripsey…well…the second part didn’t happen but none-the-less, it was still an epic day albeit covering only 42 miles of trail. 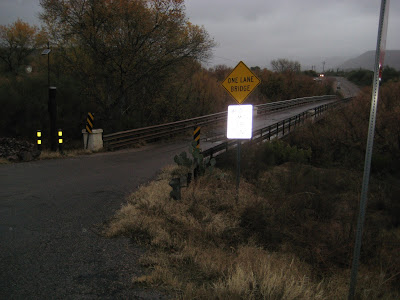 Jeff had found on the AZ trail site (http://www.aztrail.org/) that just a few days prior, the last bit of trail was finished.  So, it seemed appropriate that we had to ride this last section and see the ceremonial spike they had placed by the trail.  Heading across the bridge and left on the dirt road, the mudfest started.  The first section of trail north of the river actually follows a road recently constructed by the mine as an access road.  It climbs almost right away and we could see that eventually, all that elevation would be given up.  However, we were stopped short by a foreman that claimed the trail wasn’t open and it would be dangerous given the heavy machinery operating to build the trail.  What?  That seemed odd…wasn’t it finished?  We speculated that the mine had paid to build that last section since it gave them access to some areas (there was a drill rig up the hill from the road…certainly not part of any trail building activity).

OK, change of plans…we headed back the way we came and decided to follow Freeskiers GPS track from earlier this year and rode the railroad tracks to bypass  the “unopened” section.  We rattled along the tracks making “choo choo” sounds the best we could. 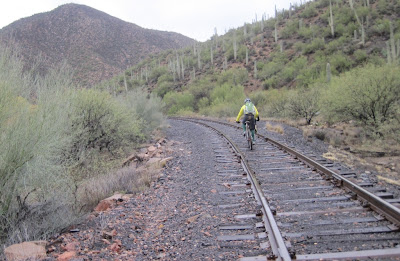 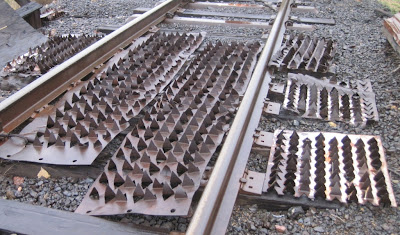 Finally just before the bridge back over the Gila, we found the little connector segment that put us on the trail.  From there, the trail meanders just north of the Gila, crossing a number of drainages.  It varies from superbly constructed trail cut into the side of steep, boulder fields to low lying, silty sections that skirt the riparian areas.   There are certainly a few short sections that need some feet and tires to compact, but all in all, it’s a great 15 mile or so stretch until you turn north up Alamo Canyon.

Darren...happy to be out of cold, snowy Canada! 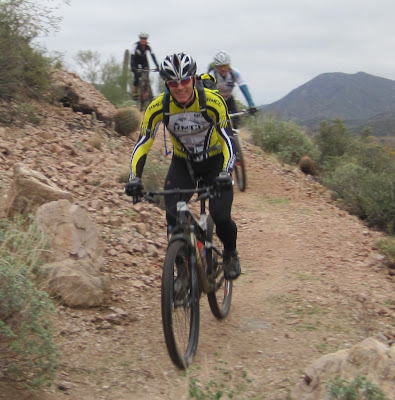 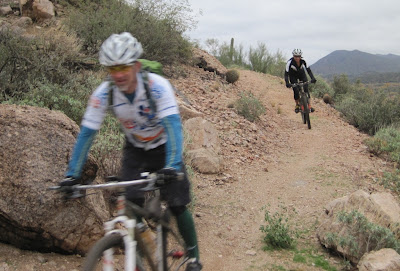 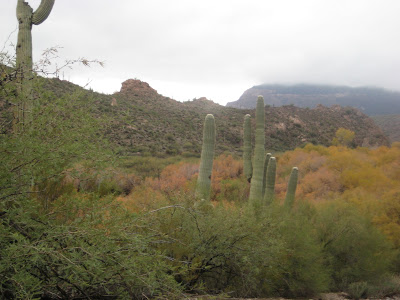 Me concentrating and climbing 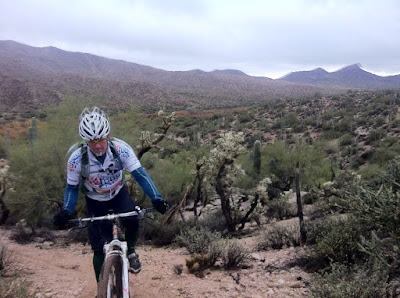 And that’s where the climbing begins…up a steep jeep road for about 0.25 miles, then turning to singletrack that continues to climb the east side of Alamo Canyon.
Heading up the jeep road... 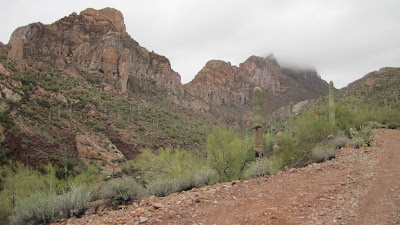 The soft tread made the progress slow but we continued to press on, continually amazed at the views ahead.  After several miles, the trail crosses back through the wash and continues to climb the west side of the canyon.  The trail here was a bit easier to climb due to a rockier surface, but also a more gradual grade. 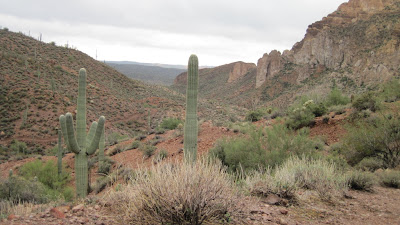 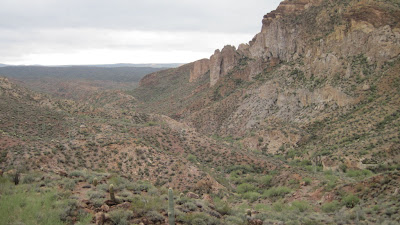 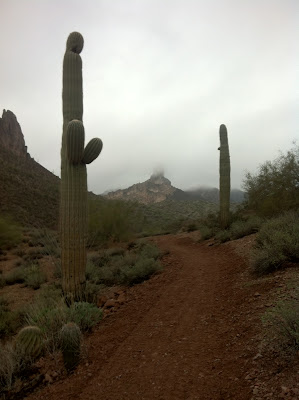 Stopping to regroup with a fair bit of climbing ahead, Nancy’s voice of reason convinced us to turn around.  It was just past noon and although we hadn’t reached the point where we saw earlier this year from the Picket Post side, it seemed the sensible thing to do a 180.  Minutes later on the descent, Jeff found the sharpest rock on the planet  and decided to ride over it putting a “mother of all sidewall gashes” into it.  Sh*t.   Ok...I'm not the most experienced rider, but the engineer in me says that's a bit of a problem. 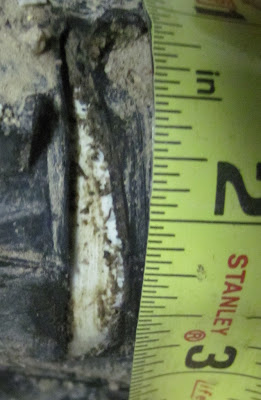 We’re easily 20 miles from cars, sweaty from climbing, and getting colder by the minute.  Park boot to the rescue… Damn, I would NEVER have figured a Park boot could mend that…I mean, it barely covered the extent of the slice.  Amazingly, he got the thing inflated with no major tube bulge and we continued on.  (Note to self: buy a few park boots and some needle and thread)!

Arriving back at the car with tired legs and muddy bikes, we loaded up and headed home.  Thanks to Jeff, Nancy and Darren for a great day.  A truly epic adventure.
And thanks to Jeff for capturing the photos...