For months, I'd been acquiring gear, pouring over gear lists and weights, and trying to decide where to do my first real 2 day outing. 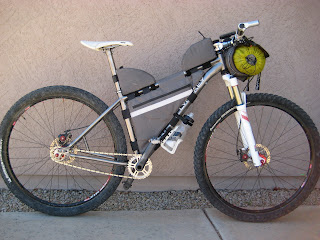 I'd thought about heading into Reach 11 and sleeping the night to test out that part of the gear but I figured I may as well go big...well, maybe not huge, but big enough.  My main goals were to
1) test out the gear and decide what works and what doesn't and
2) Get 2 good solid back to back days of miles in.  BCT was the obvious choice for this since it's fairly easy to access if you had to have someone come get you at 2AM when you're shivering.  Plus, the proximity to water made it easy to stash some water to preclude having to filter/purify.

Day 1: I parked my car at a friends house in Anthem who was nice enough to offer up some driveway space.  They also were going to ride south with me on day 2.  They(Jeff and Tim) rode with me up to Emery Hendersen via some bits of Maricopa trail, dirt roads, and the BCT.  At Hendersen, my friend Darren met me to ride north up to Bumble Bee where he had a car parked.  We set off from Hendersen at about 9AM and proceeded up the BCT.  I immediately noticed the additional weight I was carrying slowed my ascent of the hills.  I had thought about gearing down prior to the trip but decided to stick with the 32x20. 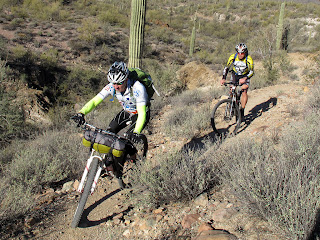 Just north of Table Mesa, my chain derailed sending me into a thorny bush and a rock pile.  Luckily the extent of my injuries were just a bruised elbow.  Near Rock Springs, we continued up the trail (I'd never traveled north on this section, only south).  I knew the ascent up the stagecoach section would be tough...sure enough, it sucked pretty bad.  I managed to ride about 1/2 of it but figured it was time to save some matches for later as well as day 2.  At Bumble Bee, Darren had a huge jug of water where I filled up.  Said my thanks and goodbye to Darren, then I continued north with my destination Hidden Treasure Mine, 11 more miles.  I arrived there in good time still with daylight and decided to find a camp spot. I'd thought about continuing up to Mayer and camping just south of there, but the colder temps and wind were a concern and in hindsight, was probably a good move.   There, I built a fire, relaxed and settled in for a quiet evening. 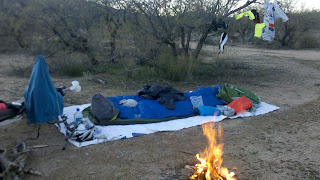 Day 2:  I woke up several times through the night but managed to get back to sleep without too much problem.  Finally, I got up at about 7:30 figuring that Jeff and Tim were going to be meeting me around 8:30.  Cooked some oatmeal, drank some coffee, and loaded up.  I headed up the trail a ways figuring I'd run into them.  Sure enough, just before Antelope Canyon, I spotted them ahead. We started heading back south, stopping at Bumble Bee where we had water stashed.  Tanked up again, we pressed on.  I could tell my legs had been pretty beat up the day before and was hoping they'd eventually come alive.  I knew there were really 3 big climbs left and just started thinking about what it'd feel like to be done with the last one.  Climbing the trail up from the river at Rock Springs was brutal.  A normally enjoyable climb, after 80+ miles in my legs and all the gear, it was all I could do to keep the pedals spinning.  I just kept setting short term goals...next hill....next hill.  Finally crossing Table Mesa Rd, I knew we had the next challenge.  Luckily my legs came back alive and I stood on the pedals.  The prior fatigue I'd felt had subsided and it seemed I could stay in a good groove.
Finally at the top, I knew we had several miles of rolling trail before the next small climb.  At the next climb, my legs felt even better and I was able to ride without worry of deep fatigue.  Rolling back into Hendersen, we knew the home stretch was left...5 miles of so-so trail but this time, it was the final 5 miles of an epic adventure.
2 more things...
First, I want to thank Darren, Jeff, and Tim.  Darren, not only a superb mtn biker and athlete, but a great guy.  I sincerely appreciate his encouragement and kindness.  Having a jug of cold water at BB was great and much appreciated.  And his future in-laws make awesome beef jerky.  It's a welcome change from a steady diet of Cliff bars.  Jeff and I have talked about a big N-to-S ride for a number of months.  Thanks to him for keeping it in his sights and involving me.  Biggest ride to date for him today and not only did he do really well, but kept a positive attitude all day.  And thanks for a spot to park my truck and shuttling water up to BB.  Great to have his Father-in-law Tim along too...great rider
Second, this was intentionally a ride to learn from...A few things I learned...
1. Not gearing down with 15 extra pounds is tough...really tough.  But hopefully, it'll make me stronger.
2. Trim every bit of weight out of your kit as you can...an extra 2 lbs has slow, wearing impact on you.
3. Your legs will feel like crap, but keep the food and water going in, and they'll come around...caffeine laced gels are awesome late in the day when you need an extra push to get over the next hill.
4.  Keep the goals small when your mind is in a bad place...next hill, etc.
5.  My gear list was pretty close to being right-on.  I'll make a few tweaks, and some deletions for the AZT300 in the interest of weight, but pretty darn close.
6.  Manage the water...I under-hydrated on day one and drank a bunch the first evening.  Luckily I knew there was going to be water at BB and worst case, I could have filtered&Purified at HTM.