Spent the week in MP doing some work, some house projects, and of course some riding. After my usual 36 mile road bike ride in PHX Friday morning, I decided Saturday AM’s ride would stay close to MP and I’d explore a bit more of Mormon Mountain. Took the northern route from MP over to Mormon Mountain and headed up the climb on FR648. Expecting to simply turn around, I stumbled upon the trailhead to Mormon Mountain trail…what? Single track heading off the east side? What an idiot I felt like not knowing this was here. (http://www.fs.fed.us/r3/coconino/recreation/mormon_lake/mormon-mtn-tr.shtml) It was a great trail, a bit rocky in places but going downhill was great. I figured it would intersect the AZT (which it did) which I could take to FR240 and back to MP. 34 miles, 3100vf. http://connect.garmin.com/activity/103043242 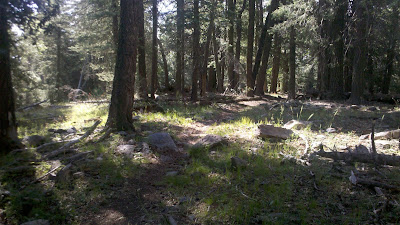 Monday, I decided I’d venture up to Flag and do something a bit different than my usual. Parked at Buffalo Park and took lower Oldham over to Elden Lookout Rd, climbed that thing(ugh) to Sunset, down Upper BBank, to Little Gnarly, then down Schultz Creek and back to Buff Park. Felt like a pretty stout ride even though it was only 20 miles, and 3000 vft. I’ve found although the ride down Sunset is fun, I almost prefer coming down Upper BBank….the fast rooty turns, mild exposure, make it a hoot. http://connect.garmin.com/activity/103582618
Cool fungus... 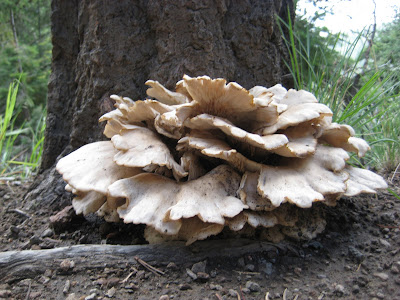 Tuesday, I decided I needed to build a bike stand for the cabin workshop...Since I have one in PHX that works well, I basically repeated the design, with a few mods. Although I don't usually do any major maintenance at the cabin, it's nice to clean up the bike between rides and do any necessary adjustments. 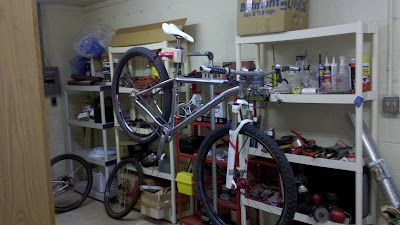 The base on this one is great...VERY stable. 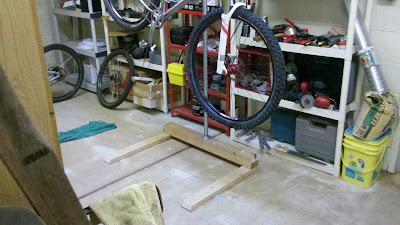 Wednesday, I took it easy and did my usual short climb up to Crystal Pt here in MP. It’s the closest singletrack in MP and with the new trail that climbs up from south side, it’s a good 18 minute or so steady climb. Although you can descend off the north side, it’s fairly rocky and more techy (still fun). However, the south side descent is like a pump track…fast, well spaced ups and downs, and lots of fun. Definitely not a trail I’d drive from far away to ride, but a nice option that can be connected with other double track and forest roads around MP. http://connect.garmin.com/activity/104118399

Thursday, I headed back up to Flag with the intent to ride the newish section of trail called “West Secret”. After crossing over the road from “east” to “west” there is an intersection which I mistakenly took the left fork then missing a right turn I ended up on the old Super Moto Trail. Ughh…Although I like a bit of a chunky challenge, there are some drops on that trail that I just can’t man-up and try. Out there by myself, no armor, I figured it was walk time. Finally, emerging from the chunk-fest, I hit the AZT and did an out and back to the end of the trail. It’s getting really close to being done…as I later found out on Sunday. All-in-all, a good ride, 30 miles, 2800 vft. http://connect.garmin.com/activity/104118393

I took a few days of rest since my quads were feeling pretty beat up from the rides and the projects around the house I was doing. Building 40 feet of rock wall caused me to do 100’s of free squats that took it’s toll on my back and legs. Finally, with two days of rest I opted for a long ride; not brutally long but the goal was over 40 miles. Did the usual “Flag Epic” where I started at the bottom of Schultz Creek and made my way up to FR418. Took FR418 a few miles east where it starts to drop in elevation. I really wanted to ride up to Lockett Meadow, but decided I could get a bit stranded up there, tired and no really good bail-out options. That would have pushed the ride into the 60mile range so I decided to turn around. Back south on the AZT, I HAB’d/rode the unfinished section of trail. Can’t wait till it’s finished. It’ll be a great climb on the SS. The day’s tally: 45 miles, 4400 vft. http://connect.garmin.com/activity/104894765
Weird fungus... 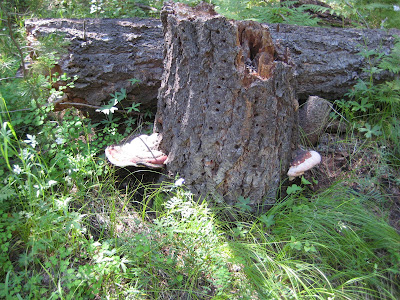 View looking south at the peaks from FR418... 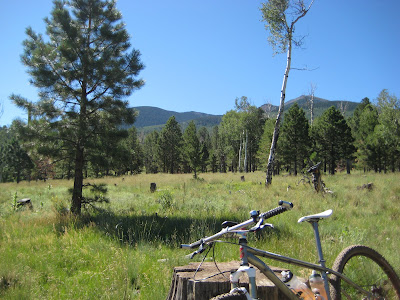 This section of AZT is just amazing...I can't get enough of it! 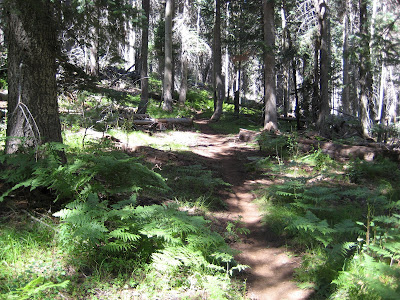