Something about going deep into a hole in the ground intrigues me… as it apparently does about a hundred other people that ventured to the lava tube north of Flagstaff on Saturday. We had attempted to do this a few weeks ago when we had some family visiting but lacked in a big way on adequate light sources. This time, I brought out the “big guns”... magicshines from my night riding gear. I mounted each on a helmet that my daughter and I each wore. My wife wasn’t sure she could handle the claustrophobic nature of the cave, so she came along with one of our brighter flashlights with the intent of turning around after a few hundred yards.
Showing up at the tube entrance at about 2pm on Saturday, we had plenty of company. The entrance looked like ant pile with people swarming around the entrance. Most of these people had no intent on venturing inside but merely look down into the darkness. We stood amongst them, put our helmets on, hooked up the lights and down in the hole we went.
At first, it was like rush hour on the freeway. People everywhere. Lucky for us, with our hands free, we were able to scramble past people quite easily. Within a few hundred yards, the tube levels out and we were past most of the poorly equipped people.
The tube itself is pretty amazing…many places you are walking along a solidified river of lava. The ceiling of the tube is almost a perfect semicircle in many places; seemingly man-made. At one place roughly ½ of the total 1 mile length, the ceiling height is significantly reduced such that it requires some crouched walking. The temperature in the tube is fairly brisk as well…about 40 degrees.
The helmet-mounted magicshines were perfect for the job. We ran them on Low and still had tons of light. Several people commented on how bright they were and how jealous they were! Having a helmet on was also a good thing since there were a few places where a bump to the head was likely with the low ceilings.
All three of us ended up going to the end of the cave. With the almost “daylight” conditions, my wife’s claustrophobia didn’t bother her. So, in the end, we considered the adventure a success and decided we’d do it all over again some other day. 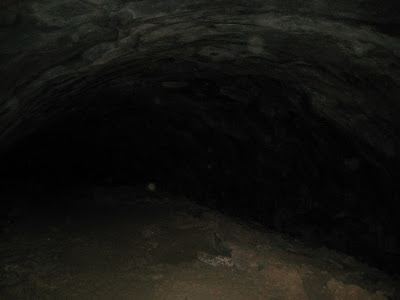 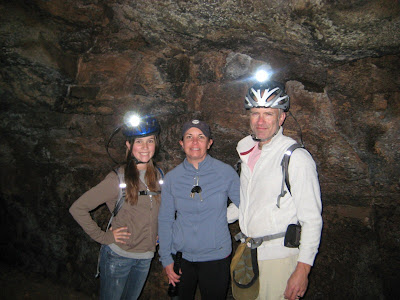