A Doctor and Two Engineers

As the heat of summer in the valley starts to break, the air in Northern AZ gets crisp and the Aspens begin to turn their golden color…Those changes all mean one thing… Coco250 time!  This was my 4th year doing the Coco250, two time finisher in the Stage Race style (which is the most popular), and two time DNF’r in the ITT style.  I’d intended to do the stage race this year, but after a little prodding by John Schilling, I decided I’d make another attempt at an ITT.  This convinced my two friends Josiah Morgan and Bart Leyko to make the trek with me since neither of them wanted to be on the course for 4 days.   Josiah had intentions to make a fast run at the course and went without sleep gear, whereas Bart and I wanted to finish in 2.5 days and still get some reasonable sleep.


So on Friday morning, 10/9/2015, the 3 of us converged on our place in Munds Park where we decided to start from given the recent rain and almost certain death mud on the course south east of Flag (on Andersen Mesa). 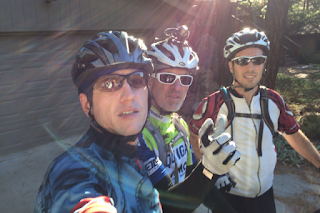 We rolled down I-17 a couple miles south to where we’d intercept the course at Schnebly Hill Rd, reset GPS’s and set off at about 8:45AM.   We arrived at the edge of the overlook and bumped our way south on the hot loop and began our descent down Munds Wagon Trail.  Nothing like a little chunky tech to start the morning with a loaded bike.  A few bobbles, but the 3 of us escaped unscathed and rolled over to do the loop around Chicken Point.  There we encountered some trail reroutes but eventually made our way through that, under Hwy 179, along the creek and through Red Rocks State Park where we got water and Gatorade.
Now some suck would begin…Lime Kiln trail.
Ughh…this gem starts with a  HAB up a rocky ridge, then a dicey descent, followed by what could be described as Hell.  That is assuming Hell has deep silt and barely identifiable single track.  Finally reaching Cottonwood, the three of us were hot, hungry and ready for some food.  We chowed down at Hog Wild and each took a 3 pound BBQ sandwich to go.  Following that, we stopped at the gas station for some final supplies before the assault on Mingus.
Queue up EXTREME Suck.
Temps Friday afternoon were hot…mid to high 80’s in Cottonwood, and a fair bit of the lower part of climb (a 4200 foot climb) was in the sun.  We were all roasting.  Bart and I pulled ahead of Josiah (who hates the heat) and would not see him again until the west side of Mingus.  We continued to push our bikes up Mingus, riding where we could, and eventually hitting Tr 105 (which has been improved thus changing it’s status from “Oh my God, this is the most epic suckfest of my life” to “this really sucks, why are we doing this?”).  Finally by 7pm, Bart and I reached the summit in dark, put on some layers, and began the descent off the west side.
At the bottom, we rode through the magic gate then sat down to eat our to-go BBQ sandwiches.  Just as we were packing up, Josiah rolled up and said he was having heat related issues and unable to eat anything.  We continued northward along the west side of Mingus, then eventually winded along the drainages on the north side of Woodchute Mtn.  There we seemed to lose Josiah again, and would later find out he stopped as his cramping got the best of him.
Bart and I made the chilly descent down to the Verde where we found a place to sleep on the north side of the river and crashed at about 11:45pm.  I woke up at about 5:40pm and prodded Bart to get up as we had a long day ahead.  Our gear was completely soaked from a heavy dew so we packed up the wet mess, filtered some water and began to climb.  It was about 6:45am as we started our climb north.
About an hour later, were stopped and Josiah rolls up.  He had apparently not been able to eat or drink anything since Cottonwood w/o throwing up.  I mentioned to him that the easiest way into Williams was to backtrack a bit to Perkinsville Rd which he ended up doing and hitchhiking his way into Williams.
Bart and I continued on route, climbing our way up onto the plateau and eventually back into the pine forest south of Williams.  There we had a discussion about Bill Williams Mtn and evaluated our appetite for the HAB up and techy descent.  We decided to give it the middle finger (thus DNF’ing), and roll into Williams.   At this point, I was still OK with doing the full loop, but my neck/upper back pain was beginning to really take its toll on me.
In Williams, we had some “real” food and while waiting, I checked Trackleaders to find that Josiah was also there.  Apparently, he was at the medical clinic where they gave him 3 liters of IV fluids and my wife (who was in Munds) drove over to pick him up.
Bart and I continued on down the forest roads to the Sycamore Rim trails where we bounced along the rocky mess of a trail.  Finally, exiting those trails, we worked our way towards I-40.  This is where things fell apart for me quickly…neck was really hurting and I was having a hard time convincing myself to get through the pain.  So, I decided to pull the plug.  Bart decided that he’d had enough and thus we made a call to my wife and Josiah drove my truck over to pick us up.
So there you have it, 3 ITT riders, 3 DNF’s.  Not the way we’d planned things, but I know at least myself, I’m more than good with it.  Having completed the loop twice stage fashion and DNFing it twice, I’d conclude that it’s a tough one when trying to squeeze the effort from 4 days to 2 and change.  We essentially rode the two toughest stages which took its toll.