Why your infatuation with single track is limiting you...


OK, so we love great singletrack…narrow, flowy, exposure, techy…all great stuff.  We live for it… Gives us a spandex chubby, right?
But, there just isn’t enough of it.  Worse yet, it can take miles of driving to get to it, travel time where we could have been riding,  be in tough shape due to weather, or get ridden so much by you that you can almost ride it in the dark without a light.

You actually CAN take a mountain bike on dirt that does not have a 8” path worn in it…it actually does work!

You see young grasshopper, not all beautiful places on this rock we call earth have a nice buff ribbon of singletrack through them or leading to them.

So get off your high horse…And start to explore all the forest roads, 2 track jeep roads, and cattle track around you….it’s just not that bad… it leads you to beautiful places rich with history.

Digressing a bit… I feel super fortunate to enjoy a cabin in Munds Park that enables me to get away from the oppressive summer heat of Phoenix.   Munds is a great little “cabiny” community far away from Flagstaff enough to feel remote, yet close enough by car to enable a run into town for another 12 pack or growler refill when "supplies" get low.

But Munds isn’t known for oodles of singletrack.  It is known for a funky little 4th of July Parade, the Lone Pine Bar, and a bunch of old retired f*cks that look at me as I do hill repeats up Pinewood Blvd as their 3 lb chihuahua barks at me like I’m a pound of hamburger.

Luckily, there are some really great maps of the forest roads in the Coconino National Forest.  That combined with a bunch of gpx files ripped off of strava, and some super-secret beta from friends has enabled me to explore this wonderful graben on the coco all accessible from Munds…  Miles and miles of forest road that might get a car or ATV on them a few times a day.

As it turns out, some cool geological sh*t happened a long time ago that lifted the northern half of Arizona.  Then a whole lot of erosion and other events that I don’t entirely pretend to understand caused some interesting rocks to be uncovered…Those rocks are what we love to ride…Sedona, Granite Dells, etc… That whole section of land south of Flag between 89A and lake Mary road that dropped in elevation a long time ago (a graben).  That ridge of land on the east side of lake Mary is where the escarpment is… for those that ride the AZT...as you ride south of Fisher Point then climb that rubly trail up out of the canyon, you are climbing up that escarpment!

Just north of Munds lies what I like to refer to as the Munds Divide… from about Mountainaire southeast to Mormon Mountain lies a small ridge that divides the watershed…rainfall north of there makes its way to the little Colorado, rainfall south of there flows down into Oak Creek and then into the Verde.  In that same area, accessible by forest roads, are a number of old railroad beds that were build back in the early 1900's to transport timber to Flagstaff for processing.  These railroad beds are simply amazing rock structures that are still existing today although the rails have long been removed.  Many of these cool things accessible only by forest road!

As I continued to explore the maze of forest roads around Munds, I found all kinds of cool stuff... again, only accessible by 2 track...


As you travel west from Munds, there are some very cool things to see...all accessible by forest road.
Finally, one of the classic views you get after riding a bunch of forest road...Point Sublime on the north rim... 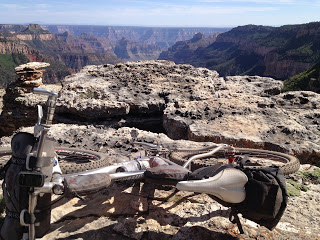 So when you wondering what to ride next, and want to see some new stuff, pull up a map or Topofusion, and get creative...sketch out a route and let the adventure begin.  Fun trips aren't all on singletrack.
cheers...OGR
Posted by Ray at 4:37 PM