Last year sometime, Tim McCabe was assembling a bunch of GPS tracks for what someday will be run as the Central AZ500.  The idea was to take the AZT750 route, shift part of it west and pickup such gems as Mingus Mountain, the Great Western Trail, the Black Canyon Trail to name a few.  Since that time, I wanted to have a go at the section from Flagstaff to Phoenix so I pinged my friend Mark Allen who is always eager for consecutive days of suffering while pedaling a loaded bike.  We decided due to time constraints, we’d shorten the route and start in Cottonwood so that it was a doable 2 day trip and finish the route at my house in Scottsdale.

Mark arrived at my house early Saturday morning and we headed north.  We parked at the Safeway in Cottonwood, did final preparations on the gear, and set off into the nipply 43 degree temps.  We made our way through downtown against a stiff headwind where we’d join the Coco250 route.  Then as we’d later joke, “sh*t got REAL” .  Making a left towards the airport, the fun began as we started the ascent up Mingus.  The grade is a bit like a hockey stick; gradual, easily climbable with the SS, then BAM, steep and loose… With a fresh set of legs attached, I felt like I needed to settle a score with this beast that so mercilessly abused me last October.  So the best I could, I stayed atop my loaded SS until I could no more at which point I gave in and hiked.
Finally, we reached the fork in the road where the Coco route goes right (and tons of ugliness REALLY starts) and our route which went left.  We proceeded along the ups and downs, savoring the rolling jeep road through the ponderosa pines and great views of the Verde Valley until we crested the southeastern shoulder of Mingus, and proceeded southwesterly where we’d pick up the Great Western Trail, or the GWT.  The GWT dealt us it’s usual senseless beating as it would descend for miles, then smack you in the face with another stinger climb.  Finally the trail headed south in a high speed, white knuckle descent where we’d hit Cherry road and eventually cross Hwy169.
From there, we continued south, though a ranch in Ash Creek, then west along a jeep road that would tie us into BCT, just north of Russian Well.  We bumped along the northern pieces of the BCT, where great flowy sections of trail would get rudely interrupted by aweful, post-holed madness until we crossed under Hwy69, just east of Mayer.  At that point, we decided to forego getting water at the Spring Valley Fire Station and push onto the Glorianna TH where we had cached several gallons of water.   We arrived at Glorianna TH, just after the sun set behind the Bradshaws, where we setup camp, built a fire, and processed the days adventure.
The next morning we woke up to the standard breeze out the north, proceeded to pack up the gear and prepare the mind and body for another long day of pedaling.  We rolled south on BCT, quickly warming up, making our way across the flowing water of Black Canyon Creek, and across the Agua Fria.  There, we came up on what appeared to be a sag stop for a race.  Turns out, there was an Xterra race happening that morning and as we made our way over the next narrow sections of single track, we were greeted by throngs of trail runners.  We did the best we could, moving over on the exposed edges of the trail to let runners pass, most of them very thankful, and inched our way up the ridgeline above Rock Springs.  There we ran into Paul and Randy who were out for a morning ride and happened into the same conga-line of runners.
Finally, by the time we reached the top of the Skyline segment, the parade of runners ceased, and we bombed south towards the Pan Loop, across the white trash superhighway known as Table Mesa Road, and up the final ugly climb of the day.  Then at about 1pm, we reached Emery Hendersen TH where we’d again cached some water.  Resting for 15 minutes or so, we filled our bottles and bladders, lathered on the sunscreen, and prepared for the final push across the flats and into the urban wasteland.  Under I-17, through Anthem, south down 7th Ave, then onto the rockless trails of the Sonoran Mountain Preserve.  From there, we made our way through the southern part of the preserve, across Cave Creek damn, and finally onto Reach 11.  There, as we spun along the flats, we were joking how we hadn’t seen a rattlesnake the entire trip (143 miles at this point), then minutes later, BAM!, Mark let’s out a “WHOA!!!” and swerves to miss a small one literally a mile or two from our destination.  We stopped, Mark snapped a few photos, and we proceeded back to my house where we toasted to a great journey with a couple green bottles.

Truly a great ride with my friend Mark. These experiences always make me appreciate the cards that life has dealt me.  Covering that much ground on a bike in 2 days is what keeps me coming back.  Looking out on the horizon as the sun sets and seeing the mountain you ascended  earlier that morning is feeling hard to describe.

Get out there.  Do it while you can.  It’s not always easy, but like the small piece of tape on my handlebars say, “If it was easy, EVERYONE would do it”.   –Ray 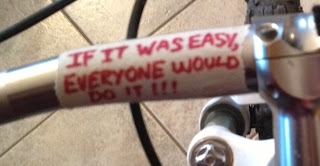