Well, it’s been a while since I wrote about some of my rides, so I figured I’d play a bit of catch up…

HUNTING: So on Friday, I decided to go do a bit of hunting.  Armed with my 29 caliber and my game bag(GPS), I set out to hunt for a few KOM’s in Phoenix Mountain Preserve.  Yes, I am admittedly a Strava addict and KOM’s (and PR’s) are my crack cocaine.  Parked at 40th Street, TT1 on T100 was my first target.  I rolled over to Tatum for a nice little warm up then hit it hard…little over 10 miles.  At the end, I checked my timer and it seemed that I may have “bagged” that one…  Then a nice stroll back to the east, Chutes was my next target.  I leisurely did one lap then hit it super hard the second time… false start on try 2 when my foot came out of my pedal on the first little techy section.  Back to the start…ok…that was better…  Rode back to the truck at an easy pace and loaded up the bike.  My bounty was safely captured in the memory of my GPS and I anxiously drove home to upload and see the fruit of my effort.  Sure enough!  KOM on both segments!  That was a good hunting trip!
Great thing about Strava is not only getting a KOM, but losing it as well.  Getting knocked of the top makes me go out and do it all over again.  Now, would someone please go take these KOM’s from me?  I’m not worthy to be holding them...there are far faster people.
http://app.strava.com/rides/8798237

HORNY TOADS and HARD GEARING:  Last weekend, I raced the new AES Flagstaff race, Aspen Asphyxiation, with a 32x19t. Last summer with all my Flagstaff riding, I felt like the 20t was almost too easy and I lost a bit of power.  So, I decided to put the 19t on for this summer; the question is, why did I do it the night before a race?  Chalk that up to stupidity.  We had some super competitive people show up even though I gave it 110%, I still ended up with a mid-pack finish.  But, all things considered, if I can stick with the 19t all summer, I should be much stronger come fall.

Yesterday, me and the 19t headed up to ride on Mt. Eldon and do a bit of suffering.  Sure enough, the suffering was a plenty.  Up Schultz Creek (not bad), then up Climb 3 (which sort of parallels Sunset).  It’s a great, lesser traveled trail that serves up plenty of pain.  Then down my favorite trail, Upper Brookbank and down my least favorite trail, Lower Brookbank to Mt Eldon Road.  Suffer session #2…climbing Mt Eldon Road. As it turns out, they’ve done a lot of work on the road and the surface is much nicer than last summer.  The climb was good and this time I did a bit of exploring up near the towers…great views up there.
http://app.strava.com/rides/8884888
BACKYARD EPICS:  Although I love riding up around the peaks in Flag, it is a 40 mile round trip from Munds Park and adds about an hour simply because of driving.  So I’ve created some routes I do starting in Munds Park that travel some lesser traveled forest roads over to the AZT by Mormon Lake.  Today’s ride, I wanted to do the AZT from where it crosses Lake Mary Road just north of Mormon Lake all the way south, almost to where it crosses back over Lake Mary Road.  I’m sure most people aren’t the biggest fans of forest roads, but I have to say that when the scenery is nice, there’s no cars to kick up dust, they really aren’t that bad.
Finally after I reached the AZT and proceeded to head south on some really sweet singletrack.  The trail in many places is on the old railroad bed that is built up on stacked lava rocks.  I can only imagine the labor it took to pile all those rocks up!  The trail is in great shape with the exception of some dead fall.  I rarely see anyone on that section of AZT but saw a few tracks.  In some cases, there were tracks through the mud now dried which I suspect were the AZT750 racers from a month ago.  Very cool…just kept thinking of how stoked they must have been riding that section of trail after the HAB from hell a little further south. 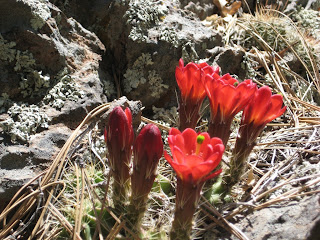